It’s that time of year, when we turn to review the results of one the most fundamental charters of our Constitution and profile ourselves as a household, peering deep into the mirror to see just what we have become.  Our census takers have been busy during the first quarter, fanning out across the vast territories of our sovereign domesticity to take a statistical snapshot that accurately captures We, the People.

I am startled to report that current trending indicates our household continues to outpace present-day averages for reproduction and housing density in both India and China. Combined. And multiplied. Our 2011 population hovers at 1,284 individuals, a staggering increase of 4,000% over our last annual census, capturing all adult males, females, children and Lego mini-figures currently in residence.

This figure does not include heads without bodies or bodies without heads. 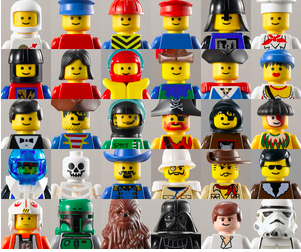 A gorgeous mosaic. All on the living room floor.

Interpreting the raw census data can be challenging, but it provides some fascinating insights.  For example, the tallest members of our society  (those over five feet) are also our oldest; together,  both of these individuals represent just .16% of our total population.   Individuals under four feet but over 4.1 cm tall also represent  .16% of the demographic but 100% of the “boys-ten years-old-and-under” category. This second cohort is growing − albeit slowly − and is extremely unlikely to reproduce in great numbers before the next census.

Not so for the 1,280 individuals (99.69%) at 4.1 cm or below. It is this group that is exhibiting the most dramatic population growth and displaying the widest-ranging diversity in terms of color, interest, and occupation  (but oddly, not head shape). This rapidly evolving generation, dubbed “Lego Nation” by some household pundits, threatens to unravel basic assumptions about the fundamental composition of our family unit.

Who are “Lego Nation”? They are a diverse group, heavily segmented, vocation-based and generally hard-working.  Many are foreign nationals from island nations — principally pirates, skeletons, gypsies and a small but vital and growing community of Ninja warriors. The population of Santa Claus impersonators continues to grow at a steady rate of two per year, indicating the likely presence of advent calendars.

What are they hard at work at? Construction-related industries continues to profile heavily in the living room and vast portions of the upstairs bedrooms as deeply blue collar. Marine Biology and Aerospace are the mainstay white collar professions, likely due to iterative submarine development  programs and extensive outer space (Star Wars) defense technology industry growth, centered primarily in the living room and bathrooms, with a scattering of support services across all sampled districts. City workers continue to be housed in close proximity to the distribution centers of the services they provide. Little is known of the Lego populations in the cellar and attic areas but they are  presumed to be statistically insignificant.

Experts remain sharply divided on what rate of growth is reasonable, but are in agreement that the current pace is unsustainable. “Where once you had a steady influx of singles, of couples, you now see whole Death Star populations arriving at our doorstep,” said one frowny-faced source who declined to be identified. “This is just crazy.”

A close review of the data indicates mass immigration tends to come in waves, with Q4 of each year showing a heavy influx, particularly around the holiday season. Smaller waves have been noted to coincide with birthdays, holidays and major medical procedures, although it’s hard to interpret the precise meaning of these outbreaks — they may well be statistical anomalies.

The Happy Family. The appearance of smaller, younger Legos implies they can now reproduce. Darwinism or Extraterrestrial intervention at work?

The most disturbing new trend appears to furnish evidence that the Legos have finally mastered the ability to self-replicate. Sightings of micro-figures − small creatures 1/2 to 1/3 the size of a normal Lego figure − are gaining in frequency. Previously it had been thought the ability to exchange body parts was de facto evidence that it was biologically impossible for Legos to reproduce.

Our household remains divided about the meaning of this new phenomena. Some feel it is the natural path of evolution, other point to the very real presence of Martians and their attendant advanced technology as the likely source of this surprising new capability (doubt remains,  as Martians tend to show up only as the subjects of alien autopsies and thus would presumably be unwilling to help further expand their oppressors footprint).

Currently, Legos have no voting rights in our house, no form of collective bargaining, no participation in any form of representative democracy. While it is true they are among our homes most prolific, flexible and entertaining performers, we and not they are the native population. Fear of this status quo changing is clearly the root cause of the concern of the current majority regarding reproductive issues.

Much has been written of late regarding the occasional diasporas that drive the various Lego populations from the living room to the bedroom, den and beyond. These are viewed by the 5-plus crowd (slang for the administration, those over five feet) as necessary to the efficient running of an orderly society. The 5-minus crowd often represents this activity as clear evidence of the oppressor’s hand being applied without just cause against a defenseless peoples (of which they consider themselves and Legos to be a part). The official take on this charge by the administration is that it is just so much agitprop.

What is clear is that with the increased population comes  increasing acts of violent protest. The number of reported battery incidents  (typically visited upon the soft, fleshy arch of the foot in the dead of night as the 5-plus go about their rounds) has been growing exponentially.

The administration’s take on these recent outbursts is clear: “We are all Americans, whether we be mini-figures, micro-figures or just plain full-figured. Can’t we all just get along?”

Leave a Reply to The Good Greatsby Cancel reply